FleshPump – A vacuum penis trainer to increase the potency

When I.L.F. announces a new product, one expects a new sex toy for men. The product, which was presented on March 26, 2017, however, surprised me. It is called FleshPump™ and as the name suggests, it is a patented penis pump.

Basically, penis pumps are nothing new. They have been successfully used for decades for potency problems and for penis enlargement. But Fleshlight would not be Fleshlight if the manufacturer would not add new, innovative things to tried and tested items.

On this news page I have collected for you some information about the new FleshPump™. Also, I ordered the device for a review. A detailed test will follow, as soon as the FleshPump ™ arrives.

Length and circumference of the penis are trained. 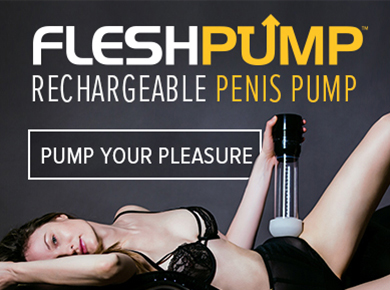 A penis pump is primarily to cure erectile dysfunction. However, with regular use, it has the positive side effect of stimulating the penis growth. Unlike most penis stretchers, it is not only the length of growth that is stimulated by the vacuum principle. Also the circumference of the penis can increase by a few centimeters.

So with the FleshPump ™ you get a device, which grants three wishes of most men:

What makes the FleshPump so special?

The design and functionality of the FleshPump ™ is what you would expect from a penis pump:

It is a cylinder made of transparent hard plastic, in which a negative pressure (vacuum) is generated. So far, nothing new. However, I.L.F. Fleshlight this time again expands a well-known principle with new features:

Although the concept of the penis pump is not revolutionized by Fleshlight, it is expanded by useful additions.

Interval training for the penis.

If you know a little about the fitness area, you will probably already have heard the term interval training. The training units are divided into short but intensive phases. ILF also recommends to use this method with the FleshPump ™ to get the best results.

According to the enclosed FleshPump instruction sheet the most effective training method is: After pushing the penis into the container, press button to create the vacuum. This is maintained for five to ten seconds, and by pressing the second button, the vacuum is released. This procedure is repeated for three to five minutes.

Tense expectation on the FleshPump test.

This was the first information about the new FleshPump ™. The detailed review will follow of course, as soon as the electric penis pump I have already ordered arrives.