When I read the Fleshlight Newsletter on March 13, 2017, I was thrilled! ILF released a fuck machine for men named Fleshlight Launch™, which can be used with a Fleshlight!

KIIROO and ILF reunite their expertise

But at the SXSW trade in Los Angeles, the partners now presented an even cooler men’s sex toy: The Fleshlight Launch! All Fleshlights can be used in the device. Now, an electronic accessory provides the Fleshlights with space so that hand movements are no longer necessary. Since mid-March 2017, this tool has been available on Fleshlight.eu and kiiroo.com.

What is Fleshlight LAUNCH?

The Fleshlight LAUNCH not only provides automated movements but can also connect interactively with partners around the world. 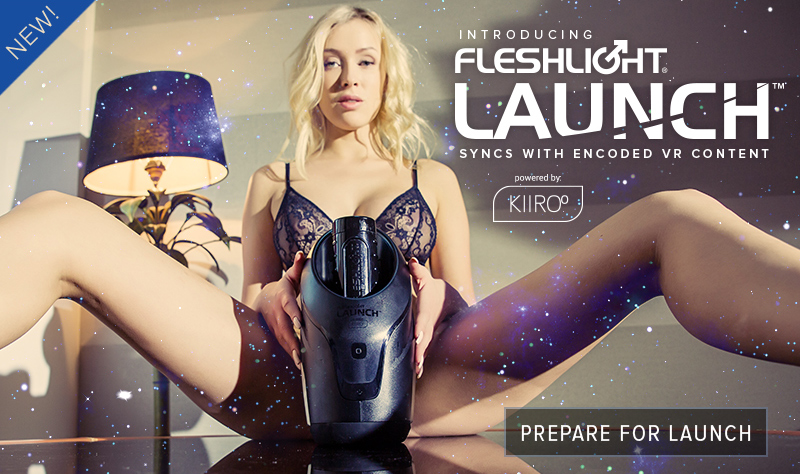 The manufacturer also promises compatibility with popular VR glasses for its accessories that are distinguished by a slim and discreet design, allowing users to move into new worlds.

The Fleshlight Launch is produced by KIIROO according to specifications of the American producer. A Bluetooth connection opens up its full range of features. It provides the connection to the PC, iPhone or Android device so that the user can select various functions.

Other settings can be made directly on the device. To begin with, the user can select the operating modes by means of control elements located on the accessory’s top. The innovative touch system promises an extremely versatile operation. Finally, the pace and the intensity of the impacts can be varied very easily, as men touch the wanking machine on the side controls.

The device has a built-in rechargeable battery, which can be recharged via a USB cable. A detailed guide in English and the USB cable is included in the package. A Fleshlight is not included.

KIIROO promises further software updates for its device in the future.

Although the  Fleshlight Launch seems to be a highly innovative product – its name is, however, unluckily chosen.

Finally, there is another device from Fleshlight under the name Launch Pad, which serves quite different purposes. This accessory is a holder for the Fleshlight and an iPad of the second, third or fourth generation, which can be combined in this way.

There is also a risk of confusion between the products. The American manufacturer of Fleshlight speaks of a “Launch” at every presentation of new products. Consumers could be irritated by the repeated use of the term.

The Fleshlight Launch is obviously a useful accessory that allows men to extend their love life. Since no manual work is required, buying the brand new device sounds like a good idea.

The unluckily chosen product name seems the only weakness of this sex toy. Only the future will reveal, whether it is really reliable in long-term use.

I ordered the Fleshlight Launch and will give you a test report as soon as possible!

St. Patricks Day SALE: Get Lucky! Save up to 15 % Discount